For the baking contest at this year’s Center for Astrophysics barbecue, I made a blackberry pie containing a spiral galaxy made from a coconut pudding.1 The pie ingredients were mostly chosen based on color and texture, as well as to accommodate dietary restrictions of colleagues. To make the inset galaxy, I created a vector drawing based on the M51 galaxy, extruded it into a solid, and 3D printed the resulting shape out of PLA to form an insert, which extended all the way down to the bottom crust. 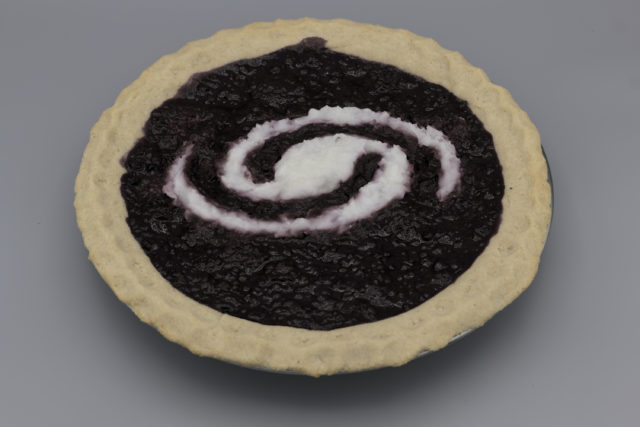 To make the crust, I followed an existing gluten-free, vegan recipe, which contains almond flour, rice flour, corn starch, sugar, and water, although I also added some cinnamon. This was baked for half an hour at 350°F and was the only part of the pie that was baked.2 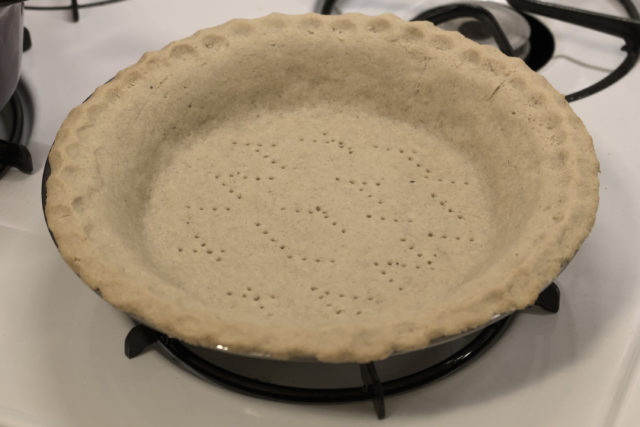 Next came the blackberry filling. In order to use a plastic insert to form the shape of the galaxy, I couldn’t bake the pie with the filling, so I developed my own no-bake recipe for the filling. This consisted of combining 3 cups (thawed) frozen blackberries, 1 cup (thawed) frozen blueberries, 3 tablespoons sugar, 2 tablespoons corn starch, and 1 teaspoon lemon juice in a sauce pan and cooking it on the stove on low-to-medium heat while stirring continuously until the mixture started to bubble. The blueberries were added in addition to the blackberries to move the color balance away from the more reddish blackberries. After being thoroughly washed with soap and water, the insert was placed in the center of the pre-baked pie crust, and the hot blackberry filling was spooned in around it. The pie was then placed in the freezer overnight to solidify the filling. 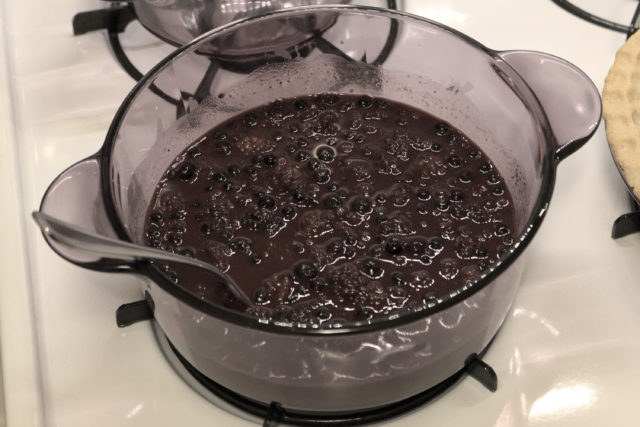 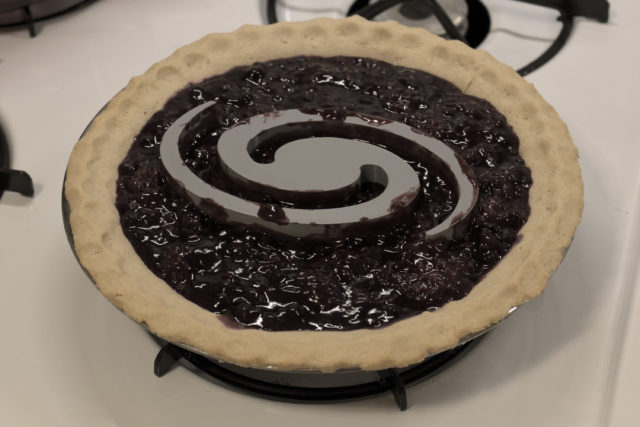 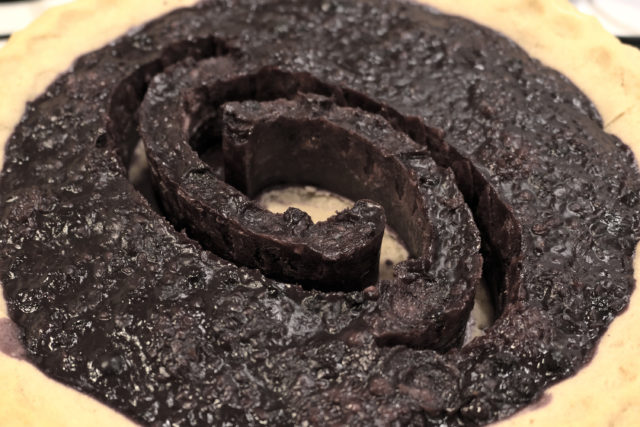 To prepare the white filling for the galaxy, a recipe based on maja blanca was used.4 Best I can tell, such desserts are generally prepared using just corn starch as a thickener, but my initial test batches had a gelatin-like texture and consistency, which I didn’t like. I solved this by substituting rice flour for some of the corn starch, which results in a significantly different texture.5 For the final recipe, I combined 1 cup coconut milk, 3 tablespoons sugar, 2 tablespoons rice flour, 2 tablespoons corn starch, and ~1/8 teaspoon vanilla extract in a small saucepan and heated it on the stove over low-to-medium heat while stirring continuously until it thickened.6 I then carefully spooned the custard into the void in the pie, until it was filled.7 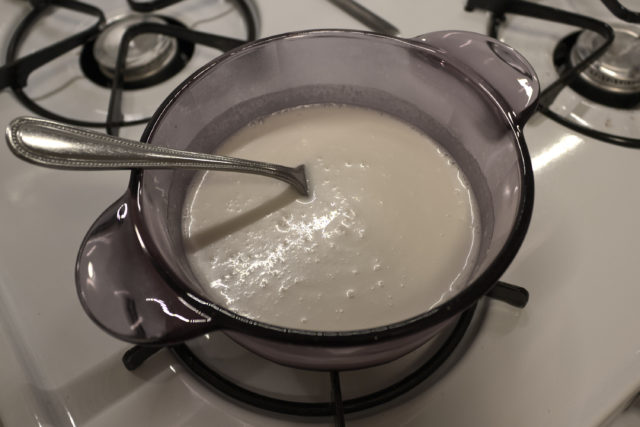 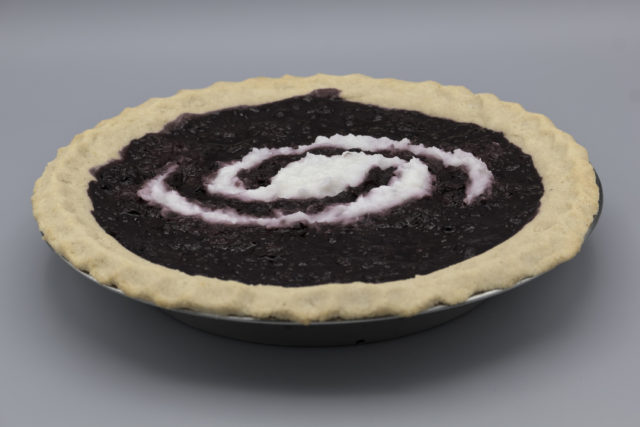 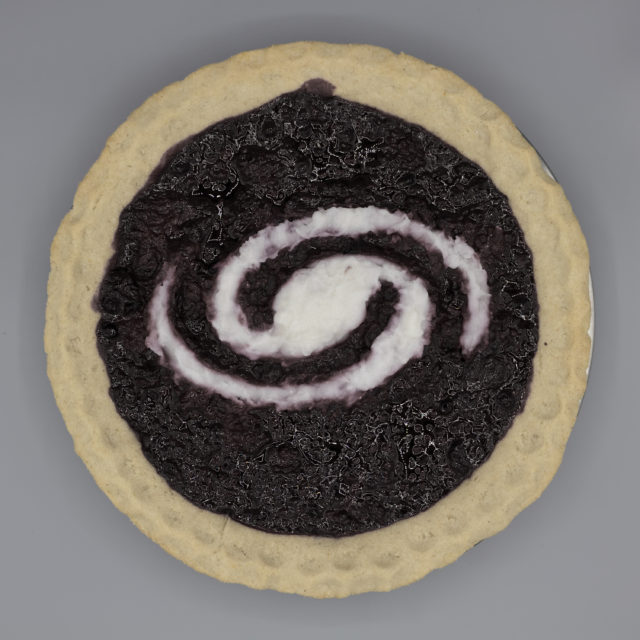 My original plan for the pie also included a few stars with diffraction spikes, either for HST or JWST, made out of holographic white chocolate. Unfortunately, with the combination of the chocolate and diffraction grating I was using, the holographic patterning only lasted a few seconds after removing the chocolate before disappearing. Furthermore, I was unable to remove the chocolate from the 3D-printed PLA plastic molds I was using. A backup idea of sifting on powdered sugar also didn’t work, as the sugar dissolved and disappeared after a few minutes. Even without the extra embellishments, the pie was still good enough to win second place in the baking contest.

I’ve uploaded the design files for the 3D-printed galaxy insert.