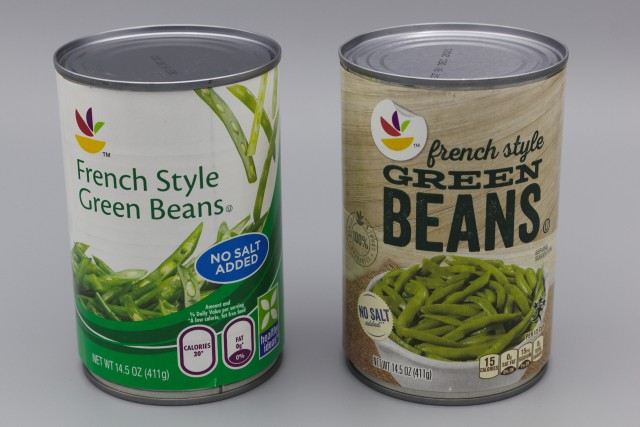 Many of the vegetables come in three variants, regular (“full salt”), low sodium, and no salt added. In the old designs, these were marked using text in a brightly-colored oval. Blue was used for no salt added, and red was used for low sodium; the regular variant did not include an oval. This design allowed one to quickly differentiate between the variants on the shelf. With the new design, these colored ovals were eliminated. The low sodium variant trades the black text on the regular variant for bright blue text and a distinctive blue bar above the text with a clearly readable “low sodium” label. This is an improvement over the old design as it makes the labeling more distinctive and easier to differentiate. Unfortunately, the same is not true for the no salt added variant, which, for some inexplicable reason, is labeled the same as the regular variant except for a small, blandly-colored circular badge in the corner. Instead, it should have been labeled with a distinctive color and a bar with a clearly readable “no salt added” label, similar to the low sodium variant, except using a different color.

The font size was increased for the ingredients list, which is one of the only improvements in the new designs.